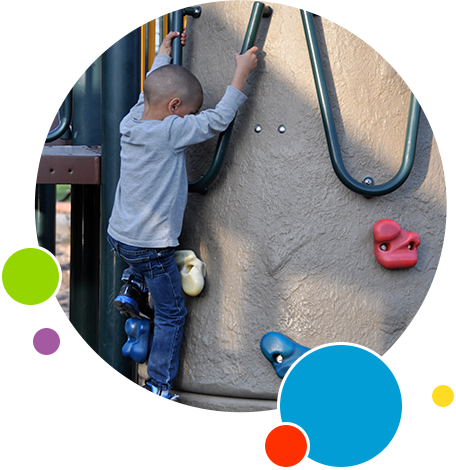 From Play and Playground Encyclopedia

As a young woman, Amy Jaffe Barzach was distressed as she watched a little girl in a wheelchair crying because she couldn’t join the other children playing at the local playground. Shortly thereafter, Amy?s second child, baby Jonathan, was diagnosed with spinal muscular atrophy. Jonathan passed away at the age of 9 months. She realized that if Jonathan had lived longer he would have been in a wheelchair, and she remembered the little girl crying because she could not join the others at the playground.

As a way to deal with her grief and honor Jonathan, Amy and Peter Barzach founded Jonathan’s Dream, a playground that would allow children and adults, with and without disabilities, to ?laugh, play and grow together.?1 Unknowingly, they also began a new movement in playgrounds.

Through the experience of developing Jonathan’s Dream, a 25,000 square foot, wheelchair-friendly playground in West Hartford, Connecticut, the Barzachs learned about the playground industry, the desires of all children for play, the realities of fund raising, and the generosity of over 1200 volunteers. It wasn?t until the playground was finished that they realized the ADA compliant playground did not meet the needs of children with disabilities.

What began in 1995 with Jonathan’s Dream led to the establishing of Boundless Playgrounds in 1997, with Amy as Executive Director and Jean Schappet as Creative Director. Jean was a play environment designer, Certified Playground Safety Inspector, and a senior level instructor for the National Program for Playground Safety as well as being on their Board of Directors. Early in the Jonathan’s Dream process Jean had offered her expertise and continued to guide the project to its completion in 1996. She also was vital in focusing the further dream that more playgrounds were needed for children of all abilities, and they had to be fully integrated and universally accessible.2

Thus, Boundless Playgrounds began, and Jean developed new barrier-free play components and designed inclusive play environments where all children could play together. Amy advised concerning community organizing, volunteer recruitment, fund raising, and project management. Many of the early lessons with Jonathan’s Dream shaped the non-profit Boundless Playgrounds’ structure and mission. Among these were the realization that parents and communities need assistance with volunteers and fund raising, that the children need to be part of the design process, and that typical playground designs and surfacing need to be rethought with children?s play needs in mind, not focusing on their disability.

Public awareness of Boundless Playgrounds’ mission to create a truly accessible and integrated playground within reach of every child started with the video documentation of the creating of Jonathan’s Dream. Visual Concepts, a multimedia production company, created this video that was then used for inspiring future playground projects and for establishing support from foundations, corporations, and state governments. Later, in 2000, another video produced by EZ New Media would further spread the concept of fully accessible playgrounds.

Amy was recognized by the National Recreation and Park Association (NRPA), which was a boost for public awareness. In 1997, she was given the R.O.S.E. (Recognition Of Significant Efforts) award for going the extra mile. This recognition brought the vision and assistance of Bernie Jacques, a lawyer who urged Amy to develop a national non-profit organization, and thus greatly expand Boundless Playgrounds’ reach.

To make this dream a reality they needed the backing of a foundation. The fledgling Boundless Playgrounds team turned to Hasbro Children’s Foundation (HCF). Using the video, they presented their grant proposal, and HCF awarded them a three-year $521,000 grant to nationally establish Boundless Playgrounds, which would assist communities to create ?community-supported, developmentally appropriate, accessible, safe and truly integrated playspaces for all children,? be a resource for the building of 18-24 playgrounds in disadvantaged communities, and to educate the public for the need of ?universally accessible recreation for all children.?3

With HCF’s backing, Boundless Playgrounds as a national, nonprofit organization was then a reality. Besides establishing a general Board of Directors, Boundless Playgrounds was also set up with a Strategic Board to address the project management resources, which included fund raising and volunteer support, an Academic Board to gather experts on design and awareness of specific developmental needs, and a Junior Advisory Board for a continued source of input from children with all abilities.

As word spread of Boundless Playgrounds’ support, parents and communities flooded them with questions and requests for assistance. By 1999 they were working with over 70 communities and had already assisted with 36 playground projects in 12 states, all through grants from foundations. At the end of 1999, the state of Maryland, under the leadership of Mark Shriver, a state delegate, and the support of Governor Parris N. Glendening, offered a $1 million initiative to build 10-12 playgrounds throughout the state, if Boundless Playgrounds could come up with $250,000 from the private sector.

Another population that Boundless Playgrounds served was the military with inclusive playgrounds for disabled veterans to be able to heal as they play with their children. Starting in 2006, three playgrounds were built at Fort Campbell, West Point, and Camp Lejeune. These ?Powering Play? Military Initiatives served the over 150,000 Iraq/Afghanistan war veterans who had mobility-limiting injuries. In 2009, Boundless Playgrounds joined with the Department of Defense to build 16 more inclusive playgrounds at military bases throughout the United States.

Besides the project management and funding resources, Boundless Playgrounds was also a resource for rethinking equipment and site designs, and thus raised the standard of accessibility in the industry. When creating Jonathan’s Dream, the Barzachs turned to Learning Structures, a company that did quality custom designs and extensively worked with the Community Built Association. Christopher ?Kit? Clews and his team were invaluable in creating the innovative designs that came out of Amy’s ?Dreaming & Design? Parties.

Using Legos, string, Tinker Toys, Popsicle sticks, modeling clay, Play-doh, and a Mr. Potato Head scooter, Amy led groups of mixed advantaged children to brainstorm what the perfect playground would include for all children. The Mr. Potato Head scooter exemplified the challenge of finding a way for someone on wheels to be able to play. The children discussed it, found solutions, and Learning Structures engineered their ideas into reality.

Seven year old Matthew Cavedon, who later became a spokesperson for Boundless Playgrounds, designed a glider boat swing at one of these parties. It included a ramp so he could get to it with his wheelchair, a steering wheel that jutted so he could drive, a means to make it move by rocking his wheelchair, and additional seats for friends who were not disabled to drive the boat. This boat, christened ?The Dreamer,? became a reality in Jonathan’s Dream playground and was an example of Boundless Playgrounds’ commitment to listening to the children.4

Unique about Boundless Playgrounds’ approach was that the accessible designs were integral in the design and not an afterthought adaptation. It was rather a new approach instead of a minor modification. Unique also was the inclusion of all generations. Adult-sized wheelchairs were also to be accommodated so that parents and grandparents with limited mobility could also play with their children and grandchildren.

A Boundless Playground design included ramped wheelchair access to the highest platform center, universally accessible pathways and surfacing, activity transfers that maximized accessibility, swings and equipment with back support, elevated sand tables and activity panels, and activities for the hearing and visually impaired. These features moved from being unusual to being commonplace. Boundless Playgrounds influenced the way playgrounds were planned.5

In September 2008, Amy turned over the leadership of Boundless Playgrounds to Fred Leone, who continued the mission to cut the ties that bind these children with disabilities to another world and to give children with disabilities the chance to play.6 To do this Boundless Playgrounds provided in-person community outreach sessions; playground designs and collaboration with the site owner, equipment vendor, and landscape architect for the overall design process; certification of all final playground plans as compliant with Boundless Playgrounds standards; the development and coordination of the execution of all project documentation; and a final assessment of playground installation.7

Hasbro Inc. continued to be a major sponsor of Boundless Playgrounds as well as CVS Caremark, Proctor & Gamble, Bank of America, American Tire Distributors, NFL Charities, and Publix Supermarket Charities. Starting in 2006, CVS Caremark had donated nearly $4 million with their All Kids Can Program and helped build 23 playgrounds in 2009.

Boundless Playgrounds raised awareness of the play needs of all people, and, in the process, was instrumental in helping raise the standards in the playground industry.