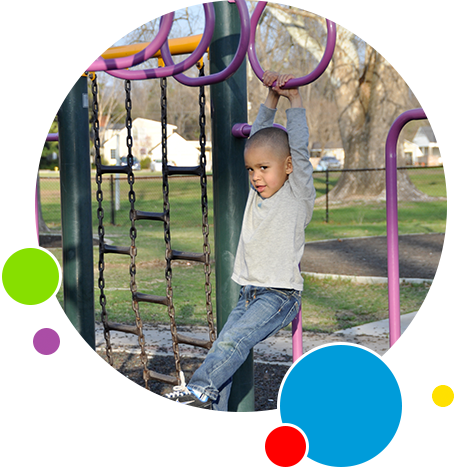 Thinking about designing your own universal accessible playground? What follows is a brief overview of the process we took to build the Leaps and Bounds Playground. When we began, there was an organization called Boundless Playgrounds? that aided individuals who wanted to build a universally accessible playground. Unfortunately, this organization no longer exists. You are more than welcome to contact our organization, if you have additional questions.

Here is what we did:

We ran into several additional problems along the way. One of the hardest was the issue of liability. Our board did not want to be held liable for any injuries that might occur once the playground was completed and donated to the City. We began the process in 1999. It took a year for us to solve the insurance issue in our favor. Then the fundraising could start. Since I am a veterinarian and the others on the board also had real jobs, none of us had any training in the art of grant writing. One of my board members and I took classes on grant writing and tackled the job of applying for grants. After about a year, this board member moved to California and I continued this difficult job. I also talked to every service club, organizations, schools, churches and synagogues possible and asked for donations. It took a lot more money and years than we had ever expected to build this playground. We were faced with many issues that slowed our fundraising attempts. 9/11 hurt. We did not feel comfortable asking for donations when our country was in a state of shock and mourning. We had hoped to build the entire playground at one time, but because we had designed such an elaborate playground, it was impossible to raise such a large amount of money at one time. We were afraid people would start to doubt us. Finally, in January 2005, community volunteers came together and installed the 5 – 12 year olds? play structure. Our contractors had already poured the concrete and had drilled all the holes needed for the posts. Having volunteers spend 4 days putting together and installing the equipment saved us an estimated $70,000 in labor costs. The special surfacing was professionally installed in February 2005. The water play area was added shortly after. Then in August 2005, Hurricane Katrina happened. With so many displaced people and pets, we stopped actively seeking donations.

Many playground manufacturers now offer customized play systems that are ADA compliant. At the time we were designing our playground, most prefabricated structures used transfer steps instead of ramps. We did not like the idea of only incorporating transfer steps that forced a child to leave their wheelchair behind in order to access the elevated portions of the 5 – 12 year olds’ play structure. Plus, the parents of children with special needs we interviewed did not want their children to always get on and off at the same location. Our play structure offers two ramps. The entire 5 – 12 year olds’ playground structure is wide enough for adult wheelchairs. There is one elevated section wide enough for two wheelchairs to be side by side. Although shredded rubber is considered ADA compliant, we wanted solid surfacing in the areas we knew were most likely to be used by those in wheelchairs. This greatly added to our expense. Currently, I believe the city values the playground as being worth $1,000,000 – 1,500,000.

In 2017, it is a lot easier to build more accessible playgrounds than in the past. Start by requesting catalogs from all the major playground manufacturers. One may have the exact components you are looking for. Also, The National Center for Boundless Playgrounds? did write a book in 2003 by Jean Schappet, Antonio Malkusak and Larry D. Bruya called High Expectations: Playgrounds for Children of All Abilities. I know it?s not current, but it does have sample designs of accessible play systems by different manufacturers.

I hope that you will find some of this information helpful.
Sincerely,
Karen G Gordon, DVM